With the ever increasing regulation and data mining of users information, browsing habits and purchases, software to surf the web anonymously is becoming more and more popular. One such service is TOR (TOR Project, Inc.), a free service that allows the user to join with other "volunteers" to cycle web browsing through a group or "nodes" of computer. The idea is the users browsing requests are run through a group of computers that make up the node and when it comes out the end, it could be one of a number of computers in the node whose IP address is recorded. This makes it impossible to track the computer the request originated in, but leaves the last computer open to allegations of being the computer user that made the request. This is referred to a "Onion Routing" because of the layers of computers involved. 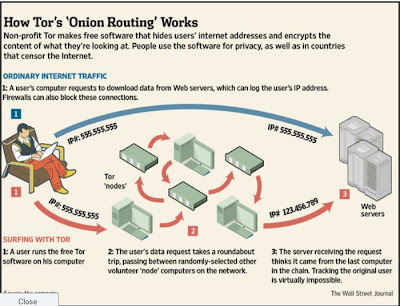 This was made clear to William Weber, as user of the service, when federal agents showed up at his home on November 28, 2012 and accused him of distributing child pornography. The 20 year old from Graz, Austria denies the allegations. Mr. Weber was a volunteer with TOR, a Walpole, Mass., non-profit that is attempting to take web surfing anonymously mainstream. Created in part to protect dissidents in countries that crack down on on-line discussions and group work such as China and Iran, TOR gets a large part of its annual budget (roughly 80%) from the U.S. Government , re rest is made up by countries like Sweden that promote a free internet.

When asked to comment, John Shehan, executive director of the National Center for Missing & Exploited Children, based in Alexandria, VA said "Tor is "a challenge for law enforcement." It is being used regularly to trade sexually exploitative images of children, he says, but there is little Tor's creators can do about it. The FBI won't comment on TOR.

Tor's executive director, Andrew Lewman says the organization has received subpoenas, but hasn't ended up in court because it doesn't actually store any data that could be of use. "We spend a lot of time talking to various law enforcement agencies," he says, adding that some police use Tor themselves for undercover work.

While we believe Tor volunteers are likely protected by U.S. law, it hasn't been tested in court. Under current federal law, Internet service and telephone providers aren't held accountable for how criminals use their networks. Still, we recommend Tor volunteers with the largest exit nodes set up their servers at third-party server facilities rather than their homes or offices, if only to prevent authorities from temporarily seizing computers that they are using for other purposes.